Scandals follow the zeitgeist, have predicted the plant-based revolution and stricter regulations on the industry today and for the future.

Common ethical concerns facing the alternative, plant-based market in 2019 included searching for the most sustainable, eco-friendly options, especially in milks.

This had led to the rise of oat, the re-emergence of soya, and the downfall of almond. 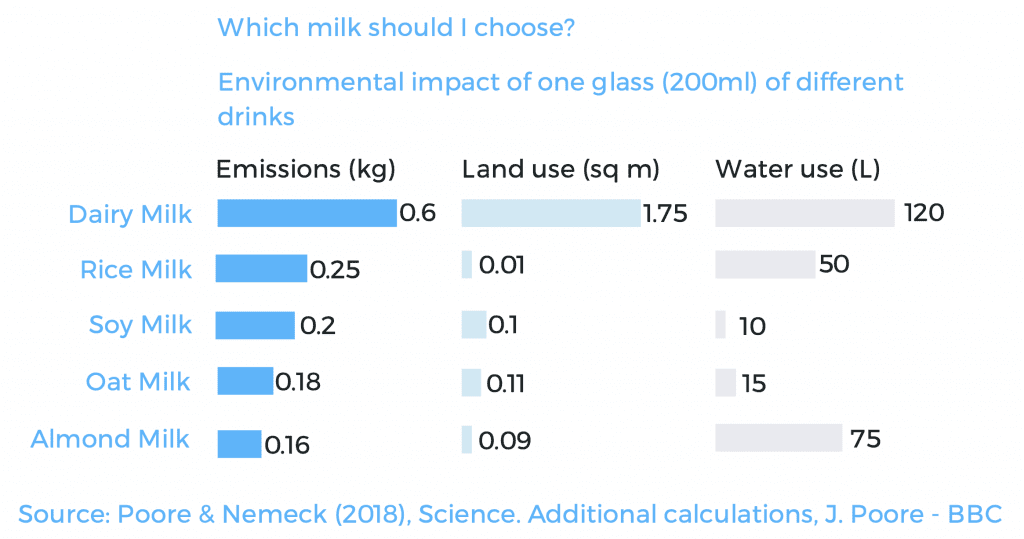 In 2006, Greenpeace released a report claiming that soy was the main crop causing deforestation in the Amazon (Greenpeace, 2019).

Soy hormonal health concerns gave almond milk a boost to become the most popular alternative milk in America (The Guardian, Jan 2019). To this day, investigative and speculative articles are being published about soy – it seems we’re still lacking in clarity.

The popularity of east-Asian cuisine in the UK, especially Japanese, will intrinsically include soy – tofu, edamame, miso, natty – will soy be given a renovation.

California grows 80% of the world’s almonds, but uses an estimated 10% of the entire water supply of a state afflicted by drought (The Guardian, Jan 2019).

Almond products have also recently come under fire due to their lack of transparency. Alpro contains only 2% almonds, so it’s more of a water emulsion with almond essence.

Consumers are now looking for products that are not full of, not lacking, in their offerings, hence the rise of oat milk, which works on the premise of what a good crop can offer the alternative mylk market.

The average cow’s milk consumption has fallen 50% since the 1950s (Mintel). But falling demand for cow’s milk is not all peachy.

Food air miles are racking up as the vegan and health markets are bringing in a wide range of exotic fruits and vegetables to the UK.

But, two avocados have an emission footprint of 846.36 CO2, almost double what 1kg of bananas produces.

Transportation from Chile, Peru, or South Africa, and growing and ripening complexities are responsible.

This is a new industry facing unparalleled growth. Of course, hurdles will need to be jumped. Meat has had 70 years to overcome intrinsic issues, still doing so to this day.

Alternatives are, in comparison, in their infancy. Reformulation, education, and revolution will pave the way for alternatives for the next few decades.

Individual responsibility has rocketed their year – young consumers in particular are taking care with their carbon footprint.

With the BBC publishing tools like the carbon footprint calculator, and the growth of DIY in every aspect of consumerism, is the future of plant-based home grown? (http://www.bbc.co.uk/news/science-environment-46459714)

Until a solution is found to air miles etc, the most sustainable diet is locally grown, seasonal produce.

Plant Based News reported that 41% of British consumers would eat lab grown meat prepared in a restaurant (March 2018).

Hailed as the answer to the environmental impact of livestock farming, predictions place lab grown meat on store shelves as soon as 2022.

It’s likely to be popular among flexitarians over traditional meat eaters, and even gets the backing of vegans.

But what about those reducing meat for health-based reasons?

Dubbed ‘clean meat’, it might take some time before consumers are convinced of that label, a lot of education will be needed.

Read part 2 here or download the full 2020 Trend Report, where we uncover the latest trends in grocery.