The Initial Shopper Verdict Is In: What The HRA Consumer Panel Is Telling Us About Changes In Lockdown Food And Drink Habits

What the HRA Consumer Panel is telling us about changes in lockdown food and drink habits:

‘Unprecedented’ is a word we’re all hearing a lot of at the moment, it feels over-used but to be fair it just about sums up 2020 so far. When the Covid-19 crisis began it was difficult to appreciate the spiralling effects of the crisis on so many parts of our society, health system and economy.

The impending threat of lockdown led to stockpiling like we’d never seen before and this, in turn, led to some extreme sales patterns. It’s crass to describe categories as ‘winning’ and ‘losing’ in this environment, but the fact is that food and drink purchases changed radically over a couple of days in March. There was huge demand on manufacturers of cupboard staples, sales of some of which have been on the downturn for years. In contrast, reports suggest fresh food sales have been declining as consumers focus on making foods last so they can avoid the dreaded supermarket trip which now takes longer, costs more and carries an (albeit very low) health risk.

It is fair to say the current crisis has really shaken up the way that we are living now. At HRA, we wanted to take a quick snapshot to explore how the crisis and the lockdown have affected the way in which people are shopping and consuming food and drink. How many people are really stockpiling? Are people really trying out new home cooking recipes with their new spare time or are they relying more on easy, convenience foods? We conducted a ‘Snap’ survey with around 100 respondents at the end of March and this is what our consumer panel research turned up. The headline key findings are:

We asked people what kinds of items they are buying more or less of in the current climate.

These results seem to suggest while consumers are unsurprisingly being drawn to long-lasting foods, many are dedicated to continuing to purchase fresh fruit and vegetables over ready meals and prepared foods. Having more time to spend on food preparation and a widespread desire to boost immunity are likely to be contributing to consumer desire to increase fresh fruit and vegetable consumption. However, with the expected effects of the labour shortage on fresh produce availability, it’s likely tinned and frozen vegetable sales will remain elevated.

Reasons for these patterns are multifaceted and are not solely consumer choice but distribution issues, enforced retail limits on products, and indeed retailers dedicating less resource and shelf space to slightly more niche items like meat alternatives and gluten free products.

2. While home deliveries are still for the minority, store footfall is dramatically down

A relatively small 14% told us that their frequency of shopping trips has stayed the same with the majority of these weekly shoppers pre-lockdown. A similar percentage (12%) said they were visiting stores about the same amount, though they were shopping in smaller stores.

The number of online shoppers grew significantly from 10% normally/mainly shopping online increasing to 16% since the crisis began in March 2020. With home delivery capacity maxed out, the race is on for retailers to rapidly expand their delivery capabilities.

57% of our survey respondents told us that they have been purchasing more food over the last few weeks compared to what they normally purchase. Of these shoppers increasing the volume of their shop, around a quarter were buying much more. This is compared with the 13% who told us that they are buying less.

When asked about how much they thought they were spending on grocery shopping, 67% felt they were spending more. Obviously, most of this is down to the 57% buying more, though some is likely to be down to retailers reducing the number of offers on products to dissuade stockpiling as well as switching from out of home to in home food and drink consumption occasions. 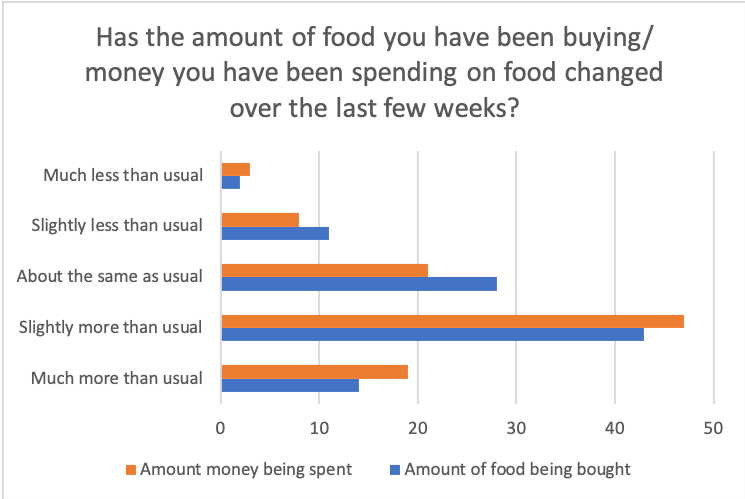 4. Consumers are completely changing where they shop

As is to be expected, it’s not just what people are buying that has been changing, but also where they choose to shop. Only 30% of respondents told us that they haven’t changed where they do their shopping.

While we can already start to see some of the sales data coming out from the retailers on what people are buying, what is less known is how people are consuming food at home.

Consumers are clearly being more creative with their food with new recipes and batch cooking gaining popularity.

When looking at whether consumers are still treating themselves even in the midst of a national lockdown, we asked our survey respondents whether they are still trying to mirror their weekend behaviours, despite the closure of restaurants, pubs and bars. 36% told us that they are now putting extra effort into cooking on the weekend or are trying to make a special weekend meal.

15% are still purchasing take-aways and 12% are replacing eating out/ takeaways with a quality ready meal. From these results, it seems that some consumers are still trying to maintain a new form of routine in their lives despite the lockdown, in trying to mimic their weekend consumption behaviours.

7. At-home wine consumption is on the rise

One of the major concerns around the psychological effects of social distancing is that it will drive alcohol consumption up as loneliness and boredom set in and certain barriers to alcohol consumption (e.g. driving, being in the workplace) are essentially removed. Of course, this is tempered by reductions in social occasions where drinking would be the norm. Therefore, we were interested to see how total alcohol consumption has been affected at this stage in the lockdown

It seems that the UK lockdown measures have not wildly changed consumers’ alcohol consumption levels so far, though as the warmer weather sets in and the effects of social isolation become more apparent, this may well change. With many people keeping their alcohol consumption fairly consistent, this ties in with people trying to mirror their weekend treat behaviours that they had before the lockdown and therefore alcohol still plays a part in these habits. 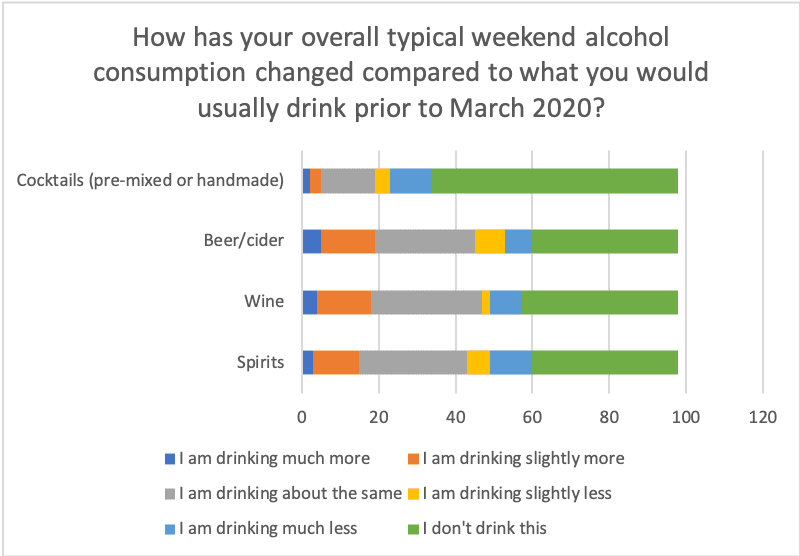 What does the future hold?

While this survey has produced some interesting figures, it will be interesting to see if these figures will change dramatically within the next few weeks as people get more settled into ‘Lockdown Life’, potentially allowing them to slip back into some of their old habits.

The most interesting question that remains is whether the new habits that consumers have had to adopt so suddenly in the current climate will continue into their normal routines once we emerge from the crisis or will they be forgotten? Will we see more home-cooking from now on and will this have a lasting effect on demand from retailers?

Through tracking consumer views and behaviours over the coming months, we hope to answer some of these crucial questions.