Grubs up! Will using insects as a protein replacement go mainstream? 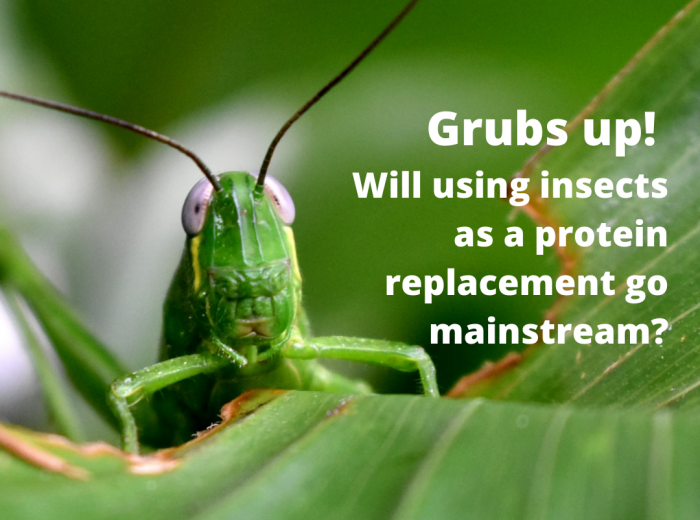 Many of us will have childhood memories of being dared to eat a worm. What was back then, and still perhaps now, an outrageous and disgusting thought, may no longer be too far away from becoming the truth.

With the global population growing, it will come as no surprise that the demand for food is rising with it. To account for this growth in demand, the immediate fall-back solution over history is agricultural expansion, often boosted by technological change.

But with agricultural production being the No.1 cause of deforestation (Greenpeace, 2020), and livestock accounting for 14.5% of the world’s carbon emissions (UC Davis, 2019), the impact agricultural expansion is having on the planet is under scrutiny.

The world is in urgent need of finding increasingly sustainable ways to meet this growth in global food demand.

Using insects as a protein source is a concept that has been ‘buzzing’ around in the background for several years now. However, only in the past year or so have significant steps been taken to make this a more mainstream idea.

Not only are insects nutritionally rich, with a protein content competing with that of meat, but they also have a lower environmental impact than their meat counterpart. Specifically, insect farming requires a lot less land and water than traditional livestock farming, and they emit less greenhouse gas (United Nations Food & Agriculture). Furthermore, insects can be raised off food waste which provides a solution for the world and the UK’s rising waste problem.

Based on this, many experts predict that insect-based products will be a nutritious and sustainable protein alternative. With estimations that by 2030, some 39million Europeans will have eaten edible insects (The Woven Network).

However, there are two major barriers that need to be overcome before widespread consumption of insects is achieved. These are: 1. consumer perception of eating bugs and 2. Government restrictions.

Recent movements have been made to combat the latter. In February 2022 a network of 30 UK edible insect companies submitted a novel food dossier to the Food Standards Agency appealing for house crickets to be deemed safe for human consumption (Foodnavigator, 2022). However, if accepted, a lot of work will need to be done to change the current mindset of UK consumers.

A replacement for animal feed?

For the mainstream, a slightly more palatable way to utilise insects, for those not yet accustomed to the idea of eating bugs, is by using them as animal feed. This would replace using products such as soy, which due to deforestation and high water usage is one of the primary factors contributing to the growing carbon footprint of the food industry.

Due to their sustainability credentials the UK is starting to see more brands launching insect-based feed suitable for livestock, aquaculture and even house pets. Furthermore this movement is receiving support from UK retailers, Tesco and Morrisons.

Tesco has been calling out to the UK government urging them to reassess laws and regulations that are stopping scale-up and nationwide adoption of using insects for animal feed. Since 2016 they have been working with UK insect-protein start-ups to help explore how they can replace the animal feed currently used in their supply chains.

Morrisons are aiming to be the first UK retailer to provide carbon neutral eggs. To achieve this, they are setting up mini-insect farms which will be fed off the food waste from their fruit and veg site in Yorkshire. These insects will then be fed to the chickens as a replacement to soy-based feed. The eggs are expected to launch at some point this year.

But what does this mean for food and drink brands?

Are UK consumers likely to turn to insects as their favourite snack anytime soon? Without a great surge of effort in educating consumers this is unlikely. But what seems more realistic is using insect-protein to feed our animals instead.

With consumers being more environmentally conscious than ever, and retailers placing greater focus on the sustainability of their suppliers’, brands should seriously consider whether they can lower their carbon footprint by utilising insect-protein within their supply chain.

Will the UK go bug eyed over insect protein?

Only time will tell. But what we do know is that currently the food industry at times has an adverse impact on our environment, and most agree that something must change if we want to preserve the world around us for future generations.

Whether you’re a brand selling insect-protein products, want to explore introducing insect-protein into your supply chain or just want to discuss this topic further, please feel free to get in touch at [email protected].